You are here: Home>Categories>Military>People>Llanhilleth's First Paralympian 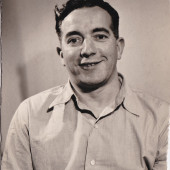 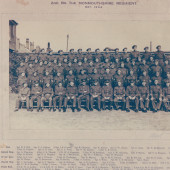 We are grateful to Roy Musto for the intriguing story of his uncle Sergeant W.J. Williams and his involvement with the birthplace of the Paralympic Games.

Serjeant W.J. Williams (Jack) was born at 34, Regents Street, Llanhilleth and worked, with his father also named Jack and known as “Virgin”, at Budd’s Colliery, Crumlin.

Although underage, he volunteered for service in World War II and enlisted in the 2nd Battalion of the Monmouthshire Regiment and on 15th July 1944, during his service in North West Europe, he was accidently shot by one of own soldiers and rendered a paraplegic.

He was brought to the recently established National Spinal Injuries Centre at Stoke Mandeville Hospital in Buckinghamshire and came under the care of its Director Dr Ludwig Guttmann, a German Jew who had fled Germany in 1939 to escape Nazi persecution of the Jews.

Dr Guttmann became renowned for his pioneering, and unconventional at the time, treatment of spinal cord injuries and was responsible for the birth of the Paralympic Games.

As a paraplegic, Uncle Jack and a small number of the other patients took part in its forerunner, the first Stoke Mandeville Games, on 28th July 1948, which coincidentally, also saw the opening of the 14th Olympic Games, at Wembley Stadium.

At those first games, 14 men and 2 women from 2 teams representing Stoke Mandeville Hospital and the Star & Garter Home in Richmond competed in an archery competition.

In 2012 the BBC produced a television film based on Dr Guttmann’s pioneering work, and the foundation of the Paralympics, and Rob Brydon, the Welsh comedian and actor, took the part of Wynne Bown, a character based on Uncle Jack.

Uncle Jack was later moved to the Star & Garter Home where he was presented with the first Morris Minor car fitted with all hand controls. The presentation was made by Lord Nuffield who owned the car company.

Also, following his qualification as a clock and watch maker, Lord Nuffield presented him with a solid oak desk/workstation.

At the home, recovering patients made poppies and were paid 4 pence, in “old Money”, per 100.

A man of many talents, Uncle Jack also sang on the wireless programme “In Town Tonight”. The song was “Harbour Lights”.

Uncle Jack’s desk/workstation was given to Bill Butler Snr when Uncle Jack died. He used it for many years until he too died and it was left to his son, Bill Jnr, who recently donated it to the Museum of Welsh Life at St. Fagan’s, Cardiff.

On the group photograph, Sgt. Williams is 2nd from the right in the Second Row. Also pictured are CSM Granville Musto (9 from left Front Row), who was Roy Musto’s father’s brother, and his cousin Sgt. Harold Phelps (9 from left Centre Row), who went on to be awarded the Military Medal. All proud Llanhilleth men.