You are here: Home>Categories>Buildings>Playhouse Cinema 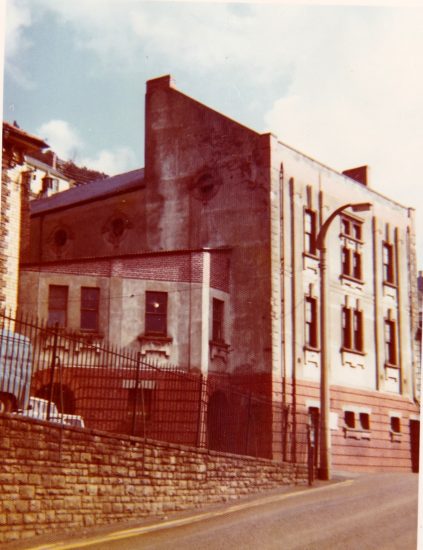 In about 1910 work began on preparing the site of the Playhouse Theatre/Cinema or, as it originally intended to be named “The Hippodrome”.
To prepare the site meant moving the solid rock which had to be blasted out with explosives and it was thought that this solid foundation would last forever. The blasting operation was a great attraction to the local children.
At the time the Playhouse was built, lighting by electricity was in its early stages in this area. 1913 an application was made to Abertillery Urban District Council for supplies to be made available for the Playhouse, Regents Street and Prospect Place.
To supply electric power to the Playhouse a generating set was housed in the basement of the building. Much of the work of installing wiring and switches was carried out by Mr. William John Harris who, at the time, lived in Hillside Terrace, Llanhilleth and earned his living as a shoe repairer in a small wooden building which was at the end of Hillside Terrace.
When the building was completed, the entertainment, which was provided by touring companies of actors and.actresses, attracted many people from all parts of the valleys.
The school children also occasionally provided a week of concerts, as did the male voice choirs. The Illtyd Operatic Society also gave choral and operatic performances, each of which was performed for a week at a time to a packed audience.
Finally opening in 1914, with seating for 750 and a 24 feet x 48 feet stage it owned and managed by M.W. Gorman.
Originally used for stage performances, the stage was well equipped with wings and flies extending from 15 to 20 feet above the stage.
In the early days, silent films were provided at the Workmen’s Institute, but by the early 1930s talking films had become the thing of the day and the Playhouse went over to being a cinema and was purchased by Llanhilleth Miner’s Institute in 1944 for £4000
The beginning of the bingo rage gave it a new lease of life, but this was only to be short lived.
The cinema was demolished in March 1968 due to subsidence.