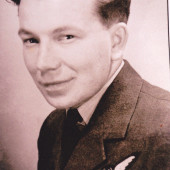 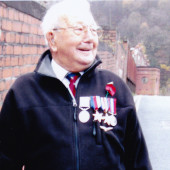 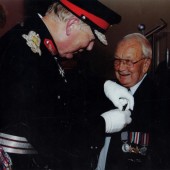 At the age of 18 years, in 1943, Charles volunteered to join the Air Training Corps at St. John’s Wood and went on to join his first squadron, 115 Bomber Command, as a Rear Gunner in a Lancaster bomber.

In July 1944 he joined his second squadron, 7 Squadron, better known as “The Pathfinders” and on 3rd February 1945 received his Pathfinders Badge for completing 5 missions.

In all he completed 56 missions and on 2nd May 1945, at Cardiff City Hall, he was awarded the “Distinguished Flying Medal” which he received from King George vi.

The third photograph shows the Lord Lieutenant of Gwent presenting Charles with a special lapel pin to commemorate the “Llanhilleth Remembers” event in November 2009, held in Llanhilleth Miners Institute.

On 28th May 1945 he was awarded the Pathfinders Permanent Certificate and the following day, 29th May 1945, he received a letter from Mr. H. Williams, Clerk to Abertillery Urban District Council, congratulating him on the award of the DFM.

After leaving the Royal Air Force, he returned home and worked as a railway signalman and made his home, with his wife Patricia, at 6 Brooklyn Terrace, Llanhilleth.

In May 2017, Charles was awarded the “Legion De Honneur” by the French government, in recognition of his contribution to the war effort.

Comments about this page